Researchers in Utrecht have used a large database of railway data to analyse the main causes of nation-wide railway network disruptions. This delay model will make it possible to calculate at any moment in time the likelihood of such a severe disruption occurring. The researchers published their results earlier this month in the academic journal PLOS ONE.

For their publication, the researchers studied the development of nation-wide disruptions of the Dutch rail network. Mark Dekker, the publication’s lead author: “These are cases in which delays accumulate and expand, for example because several conductors find themselves stuck in a delayed train. In these cases, delays can spread through the rail network like an oil stain. It doesn’t happen very often; only around five times per year. But when it does happen, it’s very serious.”

Delay index
“My first challenge was to capture the macro-dynamics of the entire rail system in a single diagram”, Dekker explains. His analysis resulted in a two-dimensional ‘delay index’, which reflects the total amount of delays on every route, as well as the general location of the delay, at a chosen moment in time. This allows Dekker to calculate the likelihood that the current situation will get out of control and cause a nation-wide rail service disruption at a given time. “For example, the system can issue an alarm if the probability rises above a certain percentage. At that point, measures may have to be taken to prevent such an ‘oil stain’ effect from occurring.” 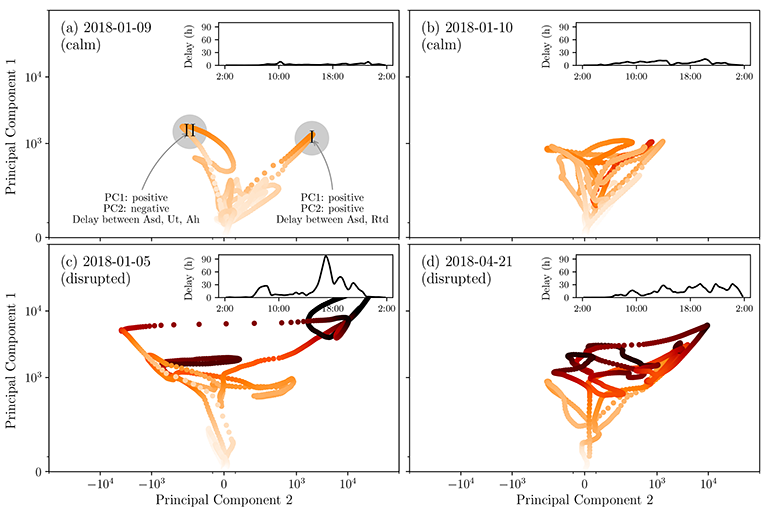 The two-dimensional delay index. Each point in the diagram is a snapshot of the total amount of delays at that moment: the closer to zero (bottom middle), the less trains are delayed.

Two main sources
Two railway trajectories appear to be main sources of national rail disruptions. “A disruption around Groningen normally has little influence on the total amount of delays in the Netherlands. But the rail connections to our neighbouring countries appear to have much more of an effect.” That means the routes from Amsterdam to Germany via Arnhem, and from Amsterdam to Belgium via Rotterdam. “And the problem can be exacerbated by the interplay between those two routes. The interaction between these two trajectories can have a decisive effect on delays elsewhere in the network.” 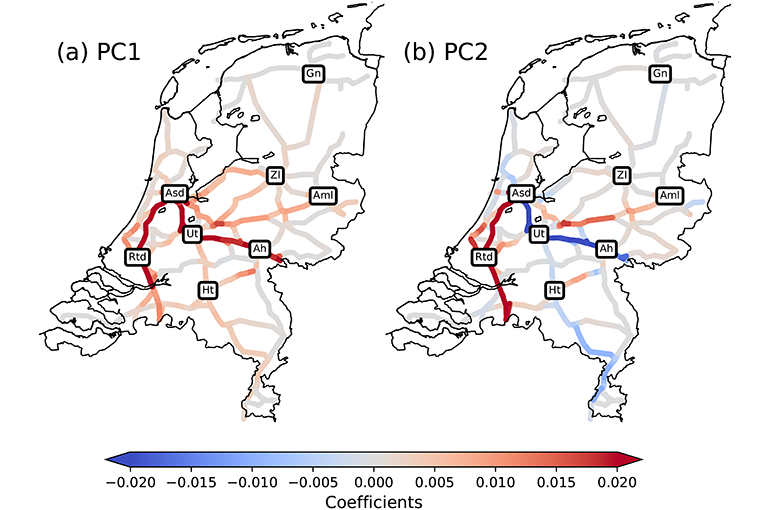 The effect of railway trajectories on major delays. The brighter the line, the greater effect it has on the total variability of train delays in the Netherlands.

Climate models
Dekker is currently conducting his PhD research at Utrecht University’s Centre for Complex Systems Studies, with PhD supervisors from the fields of Computer Science and Physics. “Before this, I did a Master’s in Climate Physics. That might sound like a strange switch, but some methods I’m currently using for the railway network are also used in climate research. I made a deliberate choice to study this subject, because I wanted to do something with applications for society at large.”

This project was financed under an NWO Complexity in Transport and Logistics grant.

Create your own profile and show us how you innovate logistics. Sharing knowledge is multiplying knowledge. That is what this website is all about: a place for open innovation.

This website uses cookies to improve your experience while you navigate through the website. Out of these, the cookies that are categorized as necessary are stored on your browser as they are essential for the working of basic functionalities of the website. We also use third-party cookies that help us analyze and understand how you use this website. These cookies will be stored in your browser only with your consent. You also have the option to opt-out of these cookies. But opting out of some of these cookies may affect your browsing experience.
Necessary Always Enabled
Necessary cookies are absolutely essential for the website to function properly. This category only includes cookies that ensures basic functionalities and security features of the website. These cookies do not store any personal information.
Non-necessary
Any cookies that may not be particularly necessary for the website to function and is used specifically to collect user personal data via analytics, ads, other embedded contents are termed as non-necessary cookies. It is mandatory to procure user consent prior to running these cookies on your website.
SAVE & ACCEPT